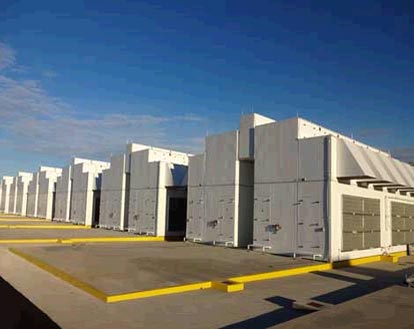 A portion of Microsoft’s Boydton, Va. data center is housed outside to reduce operating costs and increase energy efficiency.

Microsoft has announced that the company’s newest data center campus will be expanded to include two more data center facilities. Located in Boydton, Va., the facility houses server racks both indoors and outdoors within larger enclosures as part of a hybrid design engineered to reduce operating costs and increase energy efficiency. The new expansion will bring the data center’s total investment to $997 million, said Microsoft.

The primary concept behind the success of the new hybrid data center is the use of IT-PACs, pre-constructed, container-like modular data centers that are capable of operating in a variety of environments. Engineered with an adiabatic cooling system, the IT-PACs pull fresh air from outside through a layer of “wet media” to cool the server racks inside. According to Microsoft, the system allows the company to keep the servers cool using only 1 percent of the water typically consumed in a traditional data center.

Microsoft’s wide development of the IT-PACs was triggered by an experiment completed in 2008, in which the efficiency and condition of a server rack placed in a pup tent outdoors was evaluated over a period of eight months. Though Microsoft initially opted to contain the IT-PACs indoors when they were first implemented, experiment creator general manager Christian Belady of Microsoft Data Center Services ultimately convinced Microsoft to investigate and later implement the concept of “roofless” data centers during construction of the Virginia facility.